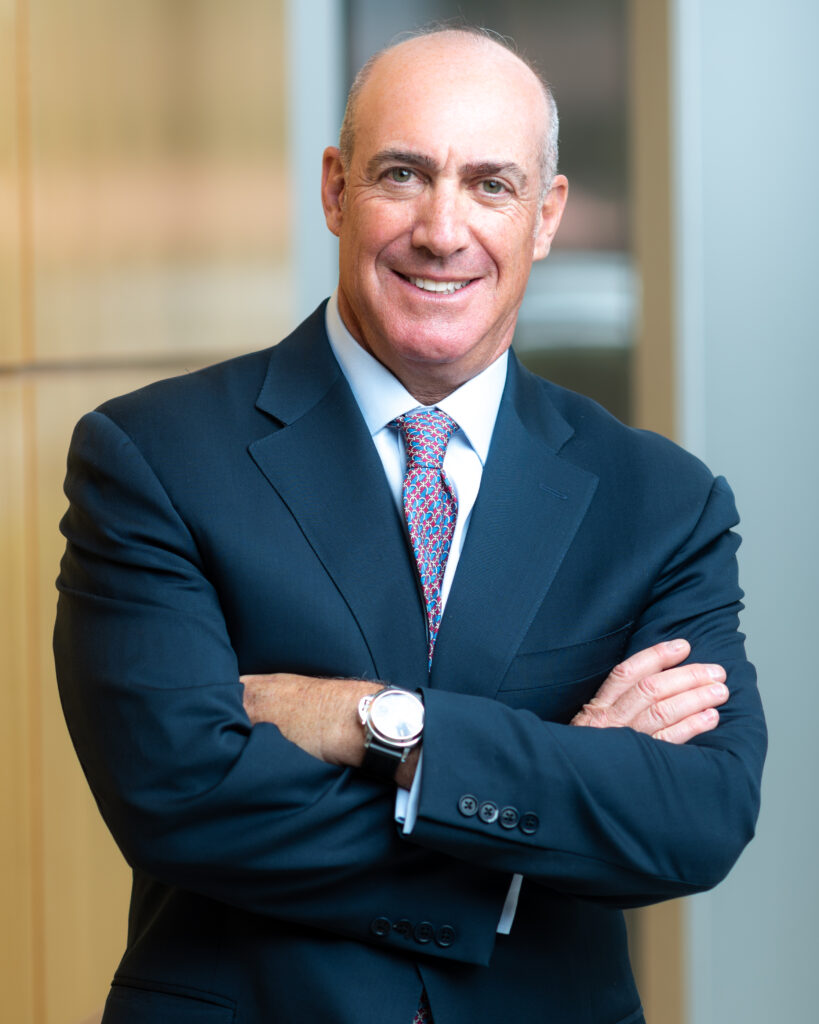 Bruce W. Steckler founded Steckler Wayne Cherry & Love after two decades of successfully litigating a variety of commercial, securities, mass tort, products liability, consumer, personal injury, and first party insurance cases. He envisioned a law firm where attorneys and employees garnered the trust and full confidence of clients. Today, he has formed a practice which provides unparalleled client service and personal attention to the needs and objectives of its clients.

He was a partner at three Dallas-based firms and, most recently, was a shareholder and the head of the General Litigation Section of one of the largest plaintiff firms in the United States. He is known as an aggressive advocate willing to take innovative approaches to achieve success for his clients. His legal acumen has won him recognition by D Magazine’s “Best Lawyers under 40” feature in 2002 through 2006, and D Magazine’s “Best Lawyers” in 2007 through 2022, and Thompson Reuters as a “Texas Super Lawyer” in 2004 through 2022. He was just recently designated a D Magazine “Best Lawyer Legend” for being consistently recognized as a top lawyer for over 15 years. Mr. Steckler enjoys an “AV Preeminent” rating by Martindale-Hubbell Law Directory, its highest peer rating. He was selected for the Plaintiff’s Hot List in 2011 by the National Law Journal. He was named a finalist for Public Justice Trial Lawyer of the Year 2012, an honor that is awarded to the attorneys who “made the greatest contribution to the public interest within the past year by trying or settling a precedent-setting or socially significant case.” He has also been named one of the “Top 100 Trial Lawyers” by the National Trial Lawyers from 2013 through 2022, was named a “2015 Top Rated Lawyer in Insurance Law” by American Lawyer Media and Martindale-Hubbell Law Directory, selected to join the American Institute of Trial Lawyers Litigator of the Year and named as one of the Top 100 Trial Lawyers in America in 2015-2022.  Bruce was recognized in 2020 for receiving one of the Top 10 Settlements in Illinois for his $36,000,000.00 settlement in Hansen-Mitchell, et al. v Welspun USA, Inc. et al. Most recently, he was again recognized in the 27th edition of The Best Lawyers in America and his firm named one of the Best Law Firms in Texas by U.S. News & World Report.

In law school, Mr. Steckler was the Leading Articles Editor of the Journal of Air Law & Commerce, a recipient of the Journal’s scholarship, a member of the SMU Law Review Association, and a board member of the law school’s Moot Court program. He was appointed by the State Bar of Texas to serve as a member of the State Bar of Texas Grievance Committee and currently serves as an Emeritus member of the Board of Directors of the Dallas Trial Lawyers Association. He received a Certificate of Appreciation in 1996 from the Dallas Bar Association for his pro bono work in the community. He has authored numerous papers on civil litigation and trial practice and has spoken at several seminars on various civil litigation topics before attorneys, professionals, and the insurance industry. Bruce is a member of the Public Justice Foundation, American Association of Justice, Dallas Trial Lawyers Association, and has been admitted to the Million Dollar Advocate Group.

Bruce W. Steckler was part of Plaintiffs’ Executive Committee for Bank Overdraft Litigation MDL (In Re: Checking Account Overdraft Litigation; MDL No. 2036), appointed by the Honorable James Lawrence King of the United States District Court for the Southern District of Florida, that held some of the country’s largest banks accountable for a practice which charged consumers unfair fees when they over drafted their checking accounts. This litigation resulted in significant settlements, with JPMorgan Chase paying out $110 million and Bank of America paying out $410 million. Mr. Steckler was co-lead counsel in the case against JP Morgan Chase. His work in these cases allowed him to be nominated for the 2012 Trial Lawyer of the Year Award by the Public Justice Foundation.

Bruce W. Steckler was appointed to Plaintiff’s Steering Committee for the In Re Fresenius Granuflo/ Naturalyte Dialysate products liability litigation and the In Re Ford Fusion and C-Max Fuel Economy litigation. These cases are currently ongoing. In addition, Bruce Steckler serves as lead Texas Counsel for the defense of product liability litigation for a large dietary supplement manufacturer.  He has successfully prosecuted and defended products liability cases ranging from dangerous pharmaceuticals to advising corporate general counsels on defending frivolous claims.

Bruce W. Steckler was appointed to the Plaintiffs’ Steering Committee for the Chinese Drywall MDL (In Re: Chinese-Manufactured Drywall Products Liability Litigation, MDL No. 2047) by the Honorable Eldon E. Fallon of the United States District Court for the Eastern District of Louisiana that obtained a ground-breaking settlement with KNAUF Plasterboard Tianjin, a prominent Chinese drywall manufacturer, as well as three major suppliers and some of the largest insurance companies in the United States. The total value of the settlement is estimated to be over $1.1 billion. This settlement helped thousands of homeowners whose properties were affected by defective drywall, which was linked to adverse health effects and metal corrosion after only three years from the inception of the litigation. It is one of the first settlements in the United States by consumers against a Chinese manufacturer.

Bruce W. Steckler has worked on several notable securities cases in Texas. He was appointed as lead local counsel in two shareholder class actions in In Re: Electronic Data Systems Class Action Litigation; Cause No. 366-01078-2008, filed in the 366th Judicial District Court of Collin County, Texas, regarding the sale of Electronic Data Systems (EDS) to Hewlett-Packard. This suit resulted in better prices for EDS shareholders. Bruce W. Steckler was also lead local counsel in City of St. Clair Shores Police and Fire Retirement System, Individually and on Behalf of All Others Similarly Situated v. Affiliated Computer Services, Inc., et al; Cause No. CC-09-07377-C, filed in County Court at Law No. 3 for Dallas County, Texas and, in concert with another firm, obtained $69 Million for ACS public shareholders. Bruce W. Steckler also has worked on anti-trust litigation and most recently, in connection with another firm, represented the Port of Galveston and the Port of New Orleans in In Re Marine Fender’s Antitrust Litigation; Cause No. 2:10-cv-02319-VBF-RC; filed in the United States District Court for the Southern District of California, which resulted in a settlement with many of the Defendants. He also represented individuals in the In Re: Musical Instruments and Equipment Antitrust Litigation; Cause No. 3:10-cv-00103-LAB-POR, filed in the United States District Court for the Southern District of California.

Bruce W. Steckler was appointed co-lead counsel in In Re EasySaver Rewards Marketing and Sales Practices Litigation, MDL No. 2161, and obtained a proposed $38 million settlement with a company that runs several retailing websites including Proflowers.com. The case claimed that consumers who made purchases through the sites were charged membership fees without their knowledge or consent. He also served as lead co-counsel and obtained a potential settlement in Cox, et al. v. Clarus Marketing Group, LLC and Provide Commerce, Inc., Cause No.11-cv-02711-H, in the United States District Court for the Southern District of California, regarding an online shipping scam.

Bruce W. Steckler has litigated cases in Louisiana against major corporations on behalf of individuals injured by occupational noise-induced hearing loss. During his career, he has aggressively represented individuals harmed by noise in various industries in Louisiana. This work has helped shape the law in Louisiana and, as a result, he has reached historic settlements with over eight major national corporations in Louisiana representing a variety of industries. Bruce W. Steckler serves as liaison counsel and co-lead counsel in In Re: Texas State Silica Products Liability Litigation, Master Docket 2004-70000, where he has represented individuals injured by silica exposure. He has handled several silica cases over the course of his career. Most notably, he represented a sandblaster who developed silicosis and scleroderma from silica exposure obtaining a settlement of over $2 million. Bruce W. Steckler has handled, tried and settled numerous medical malpractices, trucking and personal injury cases during his career. In many instances, he achieved several million-dollar settlements in personal injury cases for which he was recognized by Million Dollar Advocate Forum.

Bruce W. Steckler has been retained by businesses, homeowners, cities, country clubs and school districts in claims against their insurance carriers for bad faith and failure to adequately adjust claims following natural disasters. These representations have provided the firm with insight into the insurance industry and its practices and provided much needed recoveries, so that his clients are not victimized twice. Some representative clients in these insurance actions include The City of Pasadena, Texas; LaPorte Independent School District; and Barber’s Hill Independent School District in their hurricane Ike claims where Bruce W. Steckler was able to obtain significant recoveries for these entities.

Ready To Take The Next Step?